What Is Motivational Enhancement?

Motivational enhancement (ME) is a therapy that focuses on stimulating and inspiring change in people are who grappling with drug and alcohol abuse. ME has its foundation in motivational psychology. The goals are to produce quick, internally motivated changes in the individual. Rather than teach and guide the client through each step in recovery, motivational strategies are implemented to motivate the client to use his or her own resources to make changes. ​​​3

A Look at Substance Abuse in the U.S.

Motivational enhancement therapy can help reduce the high costs that substance abuse has on our nation. It’s estimated the following substances are responsible for contributing to the $740 billion each year that is lost to crime, missed work, and health care costs: ​​​1

Substance abuse treatment requires effective and evidence-based therapies, like motivational enhancement, to stem the tide of drug overdose deaths plaguing the United States. From 1999 to 2017, the number of people dying from drug overdoses has risen every year: ​​​2

Individuals struggling with addiction have to change to achieve and maintain sober lives.  Motivational enhancement is one way a person can get and stay sober for the long-term.

In 1980, William R Miller, Ph.D. trained counselors in behavioral interventions and how to foster empathy in clients by displaying empathy themselves. Therapist empathy had powerful positive impacts on helping clients who had alcohol abuse problems. It also had more positive outcomes regarding relapse, and later on was proven to be useful when dealing with clients who had drug abuse problems.​​​4

When Miller took a sabbatical, he was invited to give a lecture on behavioral treatments for alcohol abuse. He also met regularly with a group of psychologists to role play different treatment methods. The role play sessions led Miller to realize that his clinical practice differed from his lectures on the behavioral interventions that were effective. Miller, in conjunction with Stephen Rollnick, then synthesized his lectures with his role playing findings along with his empathy discoveries into a model they called motivational interviewing (MI).

How Does Motivational Enhancement Work?

Motivational enhancement uses the following principles to help evoke change within a client:​​​3

Expressing Empathy by the Therapist:

Expression of empathy by an ME therapist is an integral part of motivational enhancement. Empathetic expression is achieved by actively listening to the client, rather than telling the client what to do. A great deal of respect and collaboration is fostered during the ME sessions. The focus for change is on clients making life-changing decisions for themselves while the therapist is there to support those changes.

Discrepancy development is used as an activator for change. People are motivated to change when they see there is a discrepancy between where they are and where they want to be, and the change is the bridge between the two. The ME therapist seeks to point out these discrepancies regarding substance abuse behaviors to motivate the client to want to change these destructive behaviors. By raising the clients’ awareness of the consequences of their drinking or drug taking behaviors, they may be more motivated to reduce these discrepancies in recovery.

The ME therapist does not engage in direct arguments because that would probably elicit a defensive response. The therapist will not try to convince a client through arguing, but rather points out the consequences of substance abuse using other methods. When motivational enhancement therapy is done properly, the client and not the therapist makes the arguments for change.

When a client displays resistance in an ME session, rather than the therapist meeting the resistance head on, he or she rolls with the resistance. Resistance as well as ambivalence are viewed as normal and explored openly.

Clients who understand they have a serious substance abuse problem won’t be motivated to change unless they have an expectation that they will be successful. Clients are influenced to see that they can change their behaviors successfully, and they can accomplish the changes they desire. It is key that the clients believe that they can change their substance abuse behaviors, because if they have no hope, there is little reason to change.

The rolling with resistance part of motivational enhancement therapy is surrounded by a misconception. Some believe that if the ME counselor does not directly address resistance, this avoidance may be seen as approval of the resistant behavior. Approval can then encourage resistance, but this is not the entire picture.

ME therapists are trained to avoid confrontation when resistance pops up. This approach acknowledges (and thus validates) that change isn’t easy. Instead, ME therapists listen to their clients without being judgmental or defensive.

The National Institute on Alcohol Abuse (NIAA) reports that MET may be one of the most cost effective treatments for alcohol abuse. The study reports that the motivational interviewing technique, a large part of ME, was proven to overcome a client’s reluctance to enter treatment more effectively than did conventional techniques.​​​5

Another research study stated that just four sessions of MET were as effective as 12 sessions of either cognitive behavioral therapy (CBT) or twelve-step facilitation (TSF). ​​​6

What Happens in a Motivational Enhancement Therapy Session?

MET typically consists of about four sessions after an assessment has been conducted to gather information on the behaviors that will be addressed during therapy.

The first session has the ME therapist providing feedback from the information in the assessment. Assessment feedback gives the clients a chance to hear how their behavior compares to the rest of the population, and it also gives the individual an opportunity to explore any concerns.

The therapist and client talk about short- and long-term goals and analyze the ways substance abuse can hinder reaching those goals.

The plan would detail the changes that are necessary, why the changes are needed and the steps the client will take to achieve those changes. Formulation of the plan typically carries into the second therapy session, which builds on the initial progress made. The last two sessions are designed to reinforce progress and further encourage the client’s efforts.

MET is non-confrontational and non-judgmental, avoids the concept of powerlessness, and emphasizes personal choice and control. Rather than guide the client through the process of change and perform skills education, the ME therapist assumes that the person in therapy already has the resources needed for change. The therapist works instead to help an individual mobilize these resources in order to achieve the desired outcome.

How Does Motivational Enhancement Therapy Differ from Other Methods?

MET differs from the 12-step approach to treatment in that 12-step facilitation (TSF) views substance abuse as a spiritual and medical disease. There is a structured approach in TSF where the individual follows the 12-steps and is encouraged to attend meetings for the long term.

Sessions focus on boosting skills, increasing coping abilities, and addressing difficulties such as anxiety or depression. Twelve sessions are typically conducted where coping skills are taught to be used in replacement for using drugs or alcohol to cope.

How Can I Integrate Motivational Enhancement in My Life After Treatment?

To remain abstinent, it’s key to have a toolbox of resources you can fall back on to prevent a relapse. Unfortunately, relapse is a real issue, and motivational enhancement can help you prevent it.

Research shows that relapse rates run as high as more than 90% within the first year. The average overall relapse rate of addiction ranges from 40 – 60%.​​​7 Relapse happens from 40% to greater than 90% within 1 to 4 years. When you keep in mind these statistics, it’s straightforward that relapse is a clear and present danger. Motivational enhancement therapy can help reduce your risks.

The major advantage of motivational enhancement is that it is an internally-driven method. You possess the skills needed to implement this powerful tool that you demonstrated while you were in ME therapy.

Remember the encouragement that inspired the confidence you had to make the changes in your substance use behavior that then led to your recovery.

When you believe that you can avoid relapse, you’re much more likely to do so. Recite the self-efficacy statements (i.e. you are powerful, you can change, you are confident, etc.) that you discovered and stated in your ME sessions to bolster your commitment to changing and staying sober.

You can use this checklist when you are in the maintenance phase (after MET) to stay on track:

When you feel the dangers of a possible relapse, ME can supply you with your own reasons for why you don’t want to relapse, which can be extremely beneficial in aiding your continued recovery. If you are afraid of relapsing, remember that relapse is a normal part of recovery and you can take steps to prevent relapse- it’s nothing to be ashamed of.

Reach out to your therapist to discuss what is triggering you, refresh yourself with your past ME conclusions, and work up a relapse prevention action plan with the help of your counselor.

After formal addiction treatment is completed, a brief MET or checkup may be all you need to stay on the road to recovery and to keep enjoying your newly sober and rewarding life.

If you are struggling with drug or alcohol addiction, you may not want to change, or you may believe recovery is out of reach. Motivational interviewing is a counseling approach that can help you overcome your hesitancy about entering treatment and take advantage of opportunities to reach your recovery goals. 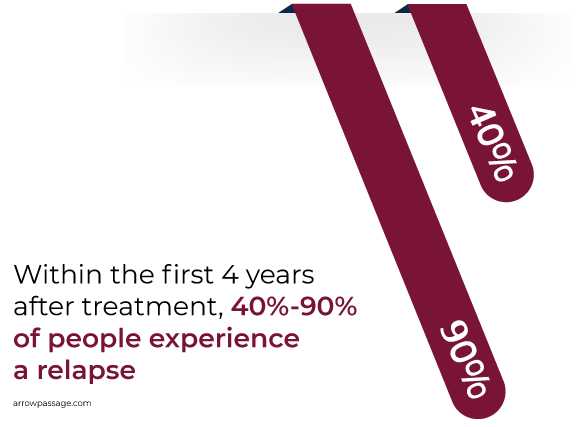 Where Can I Find Motivational Enhancement Therapy?

Arrow Passage Recovery in Massillon, Ohio offers a comprehensive range of programs that incorporate motivational enhancement therapy as well as many other evidence-based approaches.

Contact us online or call 1-844-80-ARROW to take the first steps on the road to recovery. Our professional, experienced and compassionate staff will work with you on customizing your treatment plan.